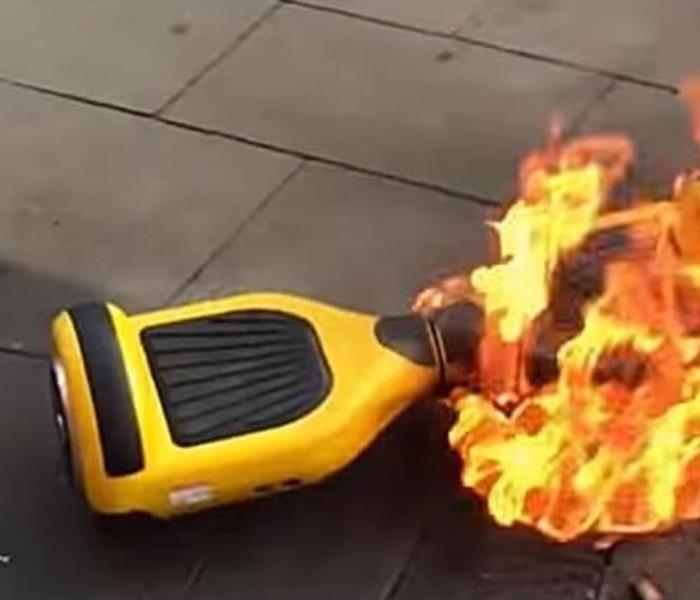 Just earlier this year, we got a call to a house in Mesa where a house fire had consumed everything in the garage but was luckily stopped before entering the home. Originally, it was thought that the fire was caused by faulty wiring in the solar panel setup. With more investigation it was found that a hoverboard in the garage actually started the fire. If the family in the house and first responders hadn’t acted quickly the whole house would have been a loss. Last year we responded to an apartment fire (also in Mesa AZ) where a similar type motorized scooter started a fire.

They certainly look like a lot of fun, but hoverboards carry a hidden danger and it's made headlines in recent years. In 2016 hoverboards were to blame for two fires in the Nashville area. One fire nearly killed two children.The family has been urging anyone who has a hoverboard to be very careful since their house fire. January 6th of 2019 was supposed to be a normal day for the Fox family. They were getting lunch when they got the text messages that flames and smoke were ripping through their home. When they got home, they kicked in the doors, and Brian Fox thought he was going to lose two of my four children today.He said, “it was just so painful.”

Two of their older children were trapped with no option but to jump out of a second-story window into the hands of their father. Mr Fox stated, “I was just begging her, yelling at her, Please jump baby, please jump.” The family is all safe, but they urge parents of children who own the hoverboards to be careful because of the destruction it caused to their lives.

Nashville firefighters say this melted hoverboard is to blame for the blaze. The Foxes say it was a Christmas present for their son, a present that destroyed almost everything. The parents say they did their research and even talked to friends before buying the toy, but now the family is figuring out how to move on in how to rebuild. Ironically, a family friend of the Foxes also had their hoverboard catch fire. Thankfully, this one was just a small fire. The Nashville State Fire Marshal has warning families not to leave a hoverboard unattended while it's, charging

There has been enough of an issue with hoverboards starting fires that the United States Product safety commission has a page on their website dedicated to Hoverboard safety issues. You can find that information here: US CPSC Hoverboard Safety.

Here are the 4 most important safety tips they outline for hoverboard safety: