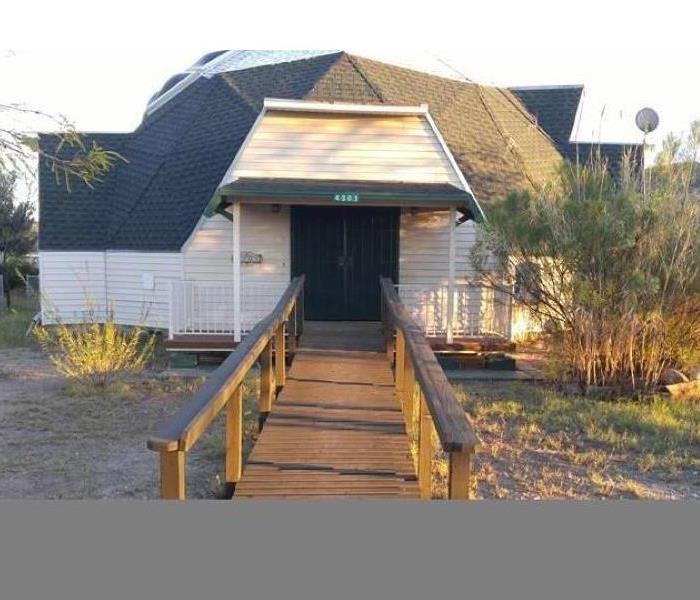 SERVPRO arriving on scene getting a photo of the front of the property.

In December of 2017, a homeowner here in Arizona had her shower interrupted by furious knocks on her front door. As she rushed to the door, she was greeted by her neighbor. They then informed her that her house was on fire!

Because of an ongoing investigation, specific details of the incident won’t be reviewed here. But what can be said is that the fire was indeed arson. Had the neighbors not notified the homeowner that the house was on fire, there is a good chance that she wouldn’t have made it out of the house alive. Home fires are a severe threat, and having an escape plan is a necessity.

SERVPRO walked through the house (5 months after the fire) to try to assess what needs to be done to restore the property to preloss conditions. We were confronted with the remnants of a family room, dining room, and kids’ room where the family spent time together. Around the hall was a bedroom where children slept whose beds and toys were still in a place covered by insulation and ash.

The kitchen where families eat a meal together was recognizable, but far from usable and food sat still in the fridge which had been there since the day of the fire. These types of events put people’s lives on hold and leave lasting damaging emotional and mental damage that sometimes never go away. Acts of a selfish person thinking that this was the appropriate response to their feelings of anger.

Here at SERVPRO of North Central Mesa, we see some of the best and worst in our society. From Crime scene clean up where we are cleaning up after blood and feces, to large arson fires like this one. We are grateful some neighbors rushed to help their neighbor. What to do when this, of that, happens. In our line of business, we deal with a lot of sadness and difficult situations: Housefires, suicide clean-ups, houses flooded, lives disrupted, and lost. Then after the first event, the pain is revisited repeatedly by dealing with insurance policies, police reports, sometimes news reporters and repeatedly explaining what happened to other family and friends. It’s a delicate issue.

If you have or family who is dealing with a similar event, please keep us in mind. You can contact us at (480) 553-7103. We are here to help, and let your loved ones have their space until they can talk about what happened and be whatever they need at that moment. If you ever have the change, be the good neighbor who cares enough for your neighbors to act.